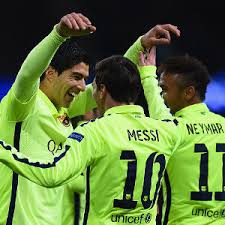 Stopping prolific Barcelona forwards Lionel Messi, Neymar and Luis Suarez in the Champions League final will be a formidable task, Juventus coach Massimiliano Allegri said after his side clinched their place in next month’s showpiece in Berlin.

Juve eliminated holders Real Madrid 3-2 on aggregate thanks to a 1-1 draw in Wednesday’s semifinal second leg at the Bernabeu and will bid for a third continental title when they meet four-times winners Barca at the Olympic Stadium on June 6.

Juve’s hopes will hinge on whether they can thwart Barca’s South American attacking trident of Messi, Neymar and Suarez, known in Spain as ‘MSN’, who have rattled in a club-record 114 goals between them in all competitions this season.

“Anything is possible in one game but it will be a mountain of task to contain a team boasting the likes of Messi, Suarez and Neymar,” Allegri told a news conference.
“Still, I am not thinking about Barcelona or the possibility of winning a treble just yet because we first have the Italian Cup final against Lazio,” he added.

Both Juve and Barca have a chance of completing a treble of Champions League and domestic league and Cup titles.

Juve have wrapped up a fourth successive Serie A triumph, while Barca can clinch a fifth La Liga title in seven years with a win at last Atletico Madrid on Sunday. They play Athletic Bilbao in the King’s Cup final at the end of the month.

Suarez, who subsequently joined Barca from Liverpool, was banned for four months and it will be the first time they have faced each other since the incident.

8 thoughts on “Containing ‘MSN’ will be a huge task”